» Things to do on Sal » Pedra de Lume, Salt mine

Pedra de lume and the salt mine

PEDRA DE LUME
the village is in the northeastern part of the island of Sal, Cape Verde. The village is situated on the east coast, about 5 km east of the island capital Espargos. Pedra de Lume is famous for its salterns which began around the 18th century. Together with Cagarral, the saltworks and around the mountain forms Cape Verde's protected area.

SALT MINE
The Pedra de Lume crater is around 900 m in radius and is an extinct volcano. The area features salt evaporation ponds (name: Salinas de Pedra de Lume)it was built over a natural salt lake that formed through infiltration of water from the sea, since the base of the crater is below the sea level, thus forming the lowest point in Cape Verde. The salt extraction is currently inactive since the 1990s.

HISTORY
Other geographical locations include Baía da Parda (Shark Bay) lies to the south and Monte Cagarral (173 m) just northeast, also in that part is the island's easternmost point named Ponta do Cagarral. Other landmarks includes a chapel and Farol de Pedra de Lume located 1 km northeast. Cape Verde's first salt mine was created in 1799.
Cape Verde's first tunnel would be constructed in 1804, and it was the only tunnel in Cape Verde until 2008 when the Pombas and Ponta do Tumba tunnels on Estrada de Corda in eastern Santo Antão would be constructed. Pedra de Lume was the island's first settlement, founded in around 1800; it was the last major island of Cape Verde to become inhabited. Salt production was very active in most of the 19th century, with most of it being exported to Brazil until that country's nationalization in 1887.
Most salt produced there in the 20th century was exported to France, Salt was carried on suspended cableways. Exports rose in the 1930s, but its production later fell and ceased continuation in 1999. Fishing has now its chief industry, and tourism is now soaring. 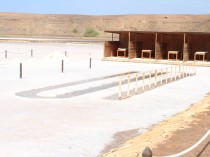 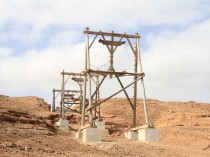