» Home » The Island of Santo Antao

Santo Antao. The second largest island, most westerly island in Cape Verde is famed for its breathtaking scenery, created by the huge mountain range dividing its land. Made up of volcanic material, the temperatures of its north coastal waters have been increasing since 1999, indicating that a new eruption may be a risk to the island.

With its pine forests, cliffs and lush valleys Santo Antao is a haven for seasoned hikers, many taking the trek to its highest point on Topo de Coroa (1,979 metres).

The first inhabitants came in the  mid 16th century and were “tenants” of Santo Antao. It was then owned by the Count of Santa Cruz who tried to sell it to England in 1732-this being unsuccessful with the people of the land claiming the island back. Fruit and sugar cane makes the island one of the most successful in Cape Verde for agriculture.

Ribeira Grande, the capital of Santo Antao is home to the majority of the 50,000 people on the island. It is a vibrant place set in the valley, with roads lined with colourful shops and restaurants.

Porto Novo, once an important port for the island, is situated in the south east and is famed for its old mansions. A trip along the road between the two places is a must for those with an interest in the historical aspect of the island.

Things to see-Tarrafel de Monte Trigo, a harbour town with black sandy beaches and also passagem, a small town east of Ribeira Grande with an impressive terraced swimming pool worth an afternoon trip. Vila das pombas with its quaint pastel houses is also worth investigating during your visit for a colourful experience. The small town of cha de Igreja in a deep sloping ravine in the west of the island should be on your itinerary and also the towns of Fontainhas and Ponto do Sol (the second residence of Cape Verde's current president).

Although there are plans to build an airport on the island, currently the only way to access this beautiful island is by ferry which runs twice a day from Mindelo on Sao Vincent. The crossing takes 40 minutes and is quite comfortable if you have your sea legs packed.

The island has great prospects due to foreign investors looking for second homes, and rental investors, with a huge surge in demand for long and short term property opportunities in the area.

The flora and fauna on the island makes it a great place for nature lovers and serious walkers alike. Mountain biking tours are available along with canyoning (around 50 routes), diving to the north of the island and swimming to the south. 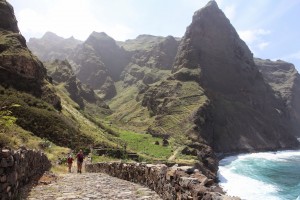