» Home » The Island Of Sao Vincente

Sao Vincente, Mindelo which is the cultural capital of Cape Verde with its old English and Portuguese themed houses lining the beautiful harbour. Music and dancing attract visitors out at night with an amazing atmosphere until the early hours. Some of Cape verde’s greatest writers and musicians call this place home. Sport was also introduced to Cape verde when the British settlers brought cricket and golf to the island.

Sao Vincente was named when it was discovered in 1462 on 22nd January (St Vincents Day) and due to its barren landscape was only suitable for grazing cattle. This changed in the 19th century when coal was discovered and supplied to British ships passing through. This enhanced the island’s population as the business incresed in demand.

When steam power ships became redundant the coal was no longer needed and Sao Vincente went into rapid depression. Now the only vessels to the harbour are occasional cruise liners and passing yachts who stop for supplies. The island’s airport in Saint Pedro has recently started to take international flights.

It would seem the island’s love of music and culture have been the driving force for the tourism industry, with music festivals and carnivals. However other activities on the island include lagoon swimming in Baia das Gatas, 30 minutes from Mindelo.White sandy beaches at Laginha  or windsurfing, kitesurfing and sailing opportunities at San Pedro appeal to many. There are also the quiet fishing villages of Calhau and Salamansa where there are a number of companies willing to take fishing tours of the local areas. 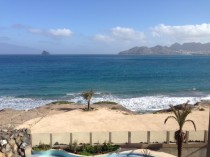 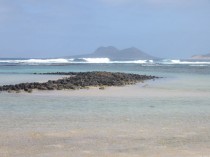